Your one stop shop for all your Cattle needs 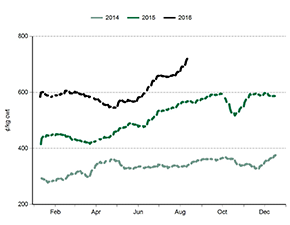 Cattle prices have continued to break new records this week by surging through the 700¢/kg cwt mark on Tuesday.  Thursday the Eastern Young Cattle Indicator (EYCI) finished at 720.25¢/kg cwt, up 28.00¢/kg cwt week-on-week and 152.00¢/kg cwt above year-ago levels.  Dubbo was the highest at 745ckg cwt followed closely by CTLX at 742c/kg cwt.

These three things typically happen to the EYCI from August to the end of spring (November) as mentioned by the MLA.

2)    Restockers take a step back. 80% of the time, restockers have purchased a lower proportion of EYCI cattle, offset by a rise from feedlots. Interestingly, restockers purchased less in each of three wet years mentioned above.

3)    Processors purchase fewer EYCI cattle at the end of spring compared to the end of winter.

NLIS ear tags are compulsory as part of selling your livestock.  Get in early for deals on Allflex, Leader, Datamars, Zeetags and Drovers.